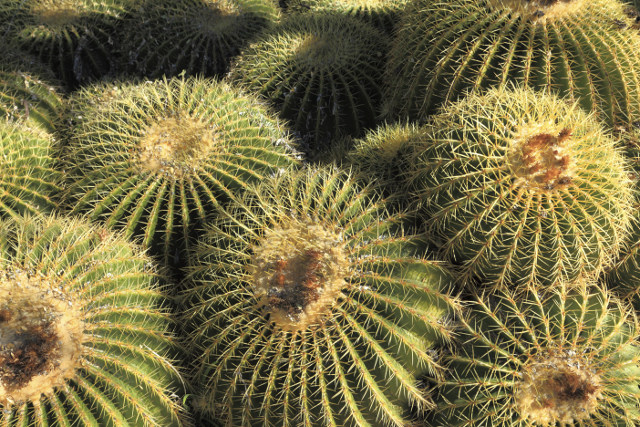 Cactaceae is a family of succulent plants in the Caryophyllales order. Cactus are unique to the American Continents and are found from the Patagonia region on the tip of South America to Canada. Many of the most unique species of cactus are found in Arizona.

Cacti have perfected the art of storing water. The leaves have evolved into spines. The chlorophyll lives in the stems of the plants which can retain large amounts of water. Cacti evolved a trick called "crassulacean acid metabolism" in which carbon dioxide is transformed into malic acid during the night. The malic acid is used for photosynthesis during the day. This mechanism allows transpiration to take place in the night; so the plant loses less water.

There are numerous species of cactus including the prickly pear, barrel cactus and giant saguaros. The Giant Saguaros is common in the Sonoran Desert. A saguaro is a long lived plant. Tall saguaros are often over a hundred years old. It take hundreds of years to grow. It often takes 75 years for a saguaro to grow arms. The plants can grow over 40' tall.

The accordion shape of the saguaro stems allow the plant to expand during the infrequent rain storms of the Southwest. The plants will visibly expand after a rain. Large plants can absorb a 100 gallons of water.

The Saguaro is the State Flower of Arizona. It is illegal to kill the plants. In 1982 a man named David Grundman earned a Darwin Award when he was out with friends killing saguaros and one fell on him. Grundman has received a great deal of ridicule, every ounce of it earned.

Cactus are pollinated by a variety of creatures including bees, humming birds, migratory birds, moths and bats. Many cactus produce edible fruit. They are often cultivated and are prized for their unique shapes and flowers.

Information for this article was drawn from Wikipedia. The photo is from Big Stock Photo. You can find more pictures of Arizona Cactus on my Tumblr site.